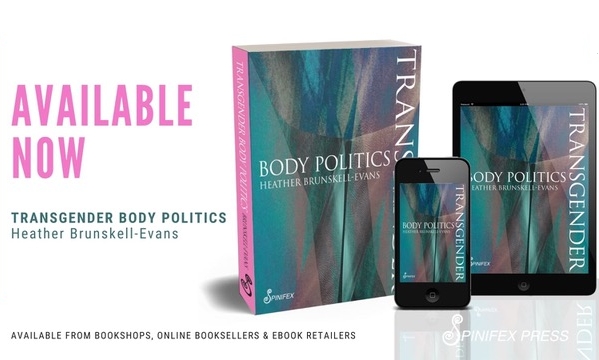 Transgenderism in the twenty-first century is patriarchy emblazoned in imperial form.

At a time when supposedly enlightened attitudes are championed by the mainstream, philosopher and activist Heather Brunskell-Evans shows how, in plain view under the guise of liberalism, a regressive men’s rights movement is posing a massive threat to the human rights of women and children everywhere.

This movement is transgender politics which, while spouting platitudes about equality, is in reality colonising and erasing the bodies, agency and autonomy of women and children, while asserting men’s rights to bodily intrusion into every social and personal space.

The transgender agenda redefines diversity and inclusion utilising the language of victimhood.In a complete reversal of feminist gender critical analyses, sex and gender are redefined: identity is now called ‘innate’ (a ‘feeling’ located somewhere in the body) and biological sex is said to be socially constructed (and hence changeable). This ensures a lifetime of drug dependency for transitioners, thereby delivering vast profits for Big Pharma in a capitalist dream.

Everyone, including every trans person, has the right to live freely without discrimination. But the transgender movement has been hijacked by misogynists who are appropriating and inverting the struggles of feminism to deliver an agenda devoid of feminist principles.

In a chilling twist, when feminists critique the patriarchal status quo it is now they who are alleged to be extremists for not allowing men’s interests to control the political narrative. Institutions whose purpose is to defend human rights now interpret truth speech as hate speech, and endorse the no-platforming of women as ethical.

On the 3rd of October 2020, Heather Brunskell-Evans, Social theorist and philosopher, Author of “Transgender Body Politics,” launched her book and answered many questions.

Since the publication was released it has generated much discussion

In the following video, Heather is interviewed by Spinifex and various feminists on her latest book and the backlash.

The Illogicality of Transgender Theory